There is something about a motorcycle that is fundamentally manly. Even if there’s a woman on the bike (for the picture obviously) the beast beneath always shines through. If you don’t own a motorcycle, you want one. If you do own a motorcycle, you want more. No amount of crashes, kids, or horror stories will dissuade men from their love of an engine strapped to two wheels. These bikes don’t just put the wind in your hair and a hottie in your lap, they’re a direct line to your testosterone and adrenaline. Old world meets new world. East meets west. Asian meets American. No, we’re not talking about the latest film from Jackie Chan and a random celebrity. We’re talking about Zero Engineering, the Japanese company that takes Harleys and turns them into “Samurai Choppers.” Remove all the frills, black everything out, and add taller bars  and you’ve got  the Blackie. And if you think it looks familiar, its because its brother (the T6) was Tony Stark’s chariot of choice in the new Iron Man. 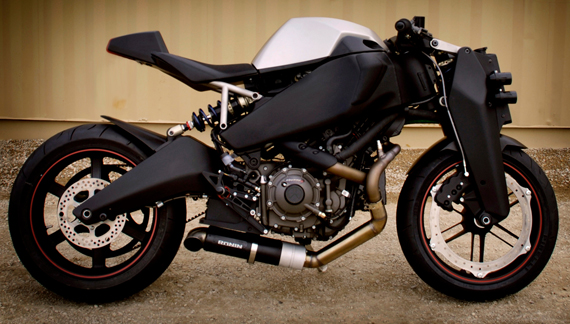 Magpul is a company you’ve probably never heard of, so today’s class is going to start with a video.

That’s right, this crazy looking motorcycle was made by the same company that made a folding machine gun. Does it look like a machine sent from the future to murder your unborn children? Yes, yes it does. The only thing we want to know is where we sign and whether or not the folding gun comes with it or we have to buy it separately. There are only really two types of motorcycle custom shops in the world – the ones that customize Harleys and the ones that do it wrong. What do you get when you cross the engine from a 67 Harley, Ducati forks, and carbon fiber? Perfection in motorcycle form. Australian builder god Dylan Robb built this bike over an eight month period in his shed with almost no tools. In our opinion, it’s more impressive than building a suit of armor in a cave from a box of scraps – and not just because it’s real. At $24,000 the Deus Grievous Angel is more expensive than every car you’re going to own until your 40. It also looks better. With a profile like that, we’re not even going to contest the Deus Ex Machina name. It really does look like god from the machine. If god was for sale for $24,000. MV Agusta dominated World Championships for over 20 years. The fact that they’re the motorcycle equivalent of Ferrari is enough reason to own one of their bikes, but this particular bike is special. Claudio Castiglioni (the big boss at MV Agusta) used all the resources at his disposal and made his dream bike a reality. When you’re individually creating every part and hitting 195mph no one is going to care about your abuse of company resources.

Even if you have absolutely no exposure to the motorcycle world, you know what Sturgis is (at least American Chopper did something right) and that it’s kind of a big deal. Winning the AMD World Championship is no small feat – especially for an American – and the Rambler from Cook Customs did it. It’s got part from International and BMW mixed with Cook’s absurdly awesome design chops. Wisconsin isn’t just for cheese anymore. Gasoline? The Verti GO don’t need no stinking gasoline. Outside of the Tesla Roadster, this is the first electric vehicle we can definitively say we would happily sign our life away to own. We will miss the smell of gasoline and the sound of a throaty engine, but the torques provided by an electric motor may just rip those feelings out of us. 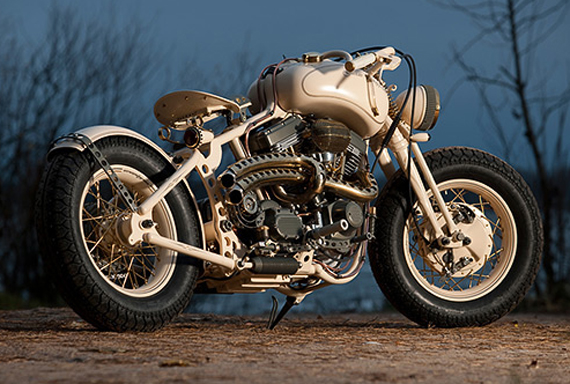 World War II era bike meets crazy steampunk retro future. Recipe for disaster or success? If Belarus based Yuri Shif is behind it, it’s a recipe for pure excellence. Normally we wouldn’t support anything that comes in “cream,” but add enough metal, rubber, and gasoline and even a man’s mind can be changed. Environmentalists are people too, so they deserve a manly alternative to their Prius. If you can’t get over the lack of gasoline and sound of an engine (and you can handle the constant smell of invisible french fries) Jordan Meadows Metalback is just the “alternative” vehicle you’ve been looking for. Just because you hug trees doesn’t mean you shouldn’t be able to ride a two-wheeled bullet between protests. Falcon is a company that takes broken shit and makes something gorgeous out of it. Unlike your last failed relationship, they succeeded. Again. They want to be environmentally conscious, but they don’t want anyone to question their manliness so they opted for sustainability over alternative energy. Start with a derelict 1970 Triumph Bonneville and add significant amounts of blood, sweat, and tears and the end result speaks for itself. If she won’t get off your ass about buying a bike, the IZH 2012 Hybrid from Igor Chak is your best option for freedom on two wheels (outside of divorce, obviously). It’s got dual airbags and crumple zones to soften the blow in the inevitable crash. Not only that, all the wiring is built into the frame and the camera in front overlays information with GPS for augmented reality navigation. It’s like riding a video game. Did we mention that IZH is most famous for being the manufacturer of the AK-47? There’s nothing to say about the Triumph Rocket III Roadster that hasn’t been said before, but here’s food for thought. At $18000, 2.3L, 146bhp, and 163ft-lb of torque it’s bigger and more badass than every part of that new Honda Civic you’re thinking about buying. The last time manliness was this affordable was when you went to the “bar” for $1 dances. And none of those offerings were anywhere near as gorgeous as this bike from McDeeb. It’s a Classic Farm Royal Enfield custom that you’re going to have to do it yourself until a US importer gets on the ball. Look at it. It looks like the love child of a Transformer and a fighter jet. It’s a Ducati and you know you want it. Unlike some of the other bikes that you will never be able to touch (let alone ride) this one can be yours, right now, for a measly $19,000. Do you really want to be responsible and buy a sedan, or do you want to own a fighter jet on wheels?