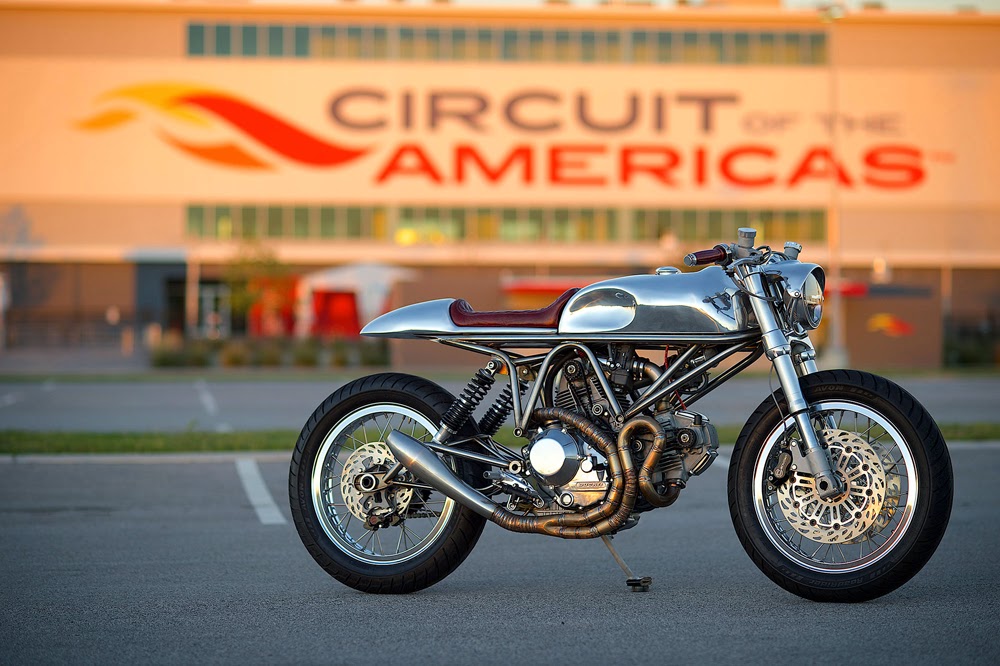 Austin’s Revival Cycles continue to raise the bar with their impressive build portfolio and their latest custom creation is a jaw dropping masterpiece. Based on what was once a bright yellow, full faired 1997 900SS, their J63 Cafe Racer is a nut and bolt reincarnation of Ducati’s venerable Super Sport. Exposing the bikes beautiful 90 degree v-twin, redesigning it’s frame and modifying it’s suspension were only the beginning of this comprehensive build, but it’s the bikes unique bodywork that really makes it a cut above the rest. 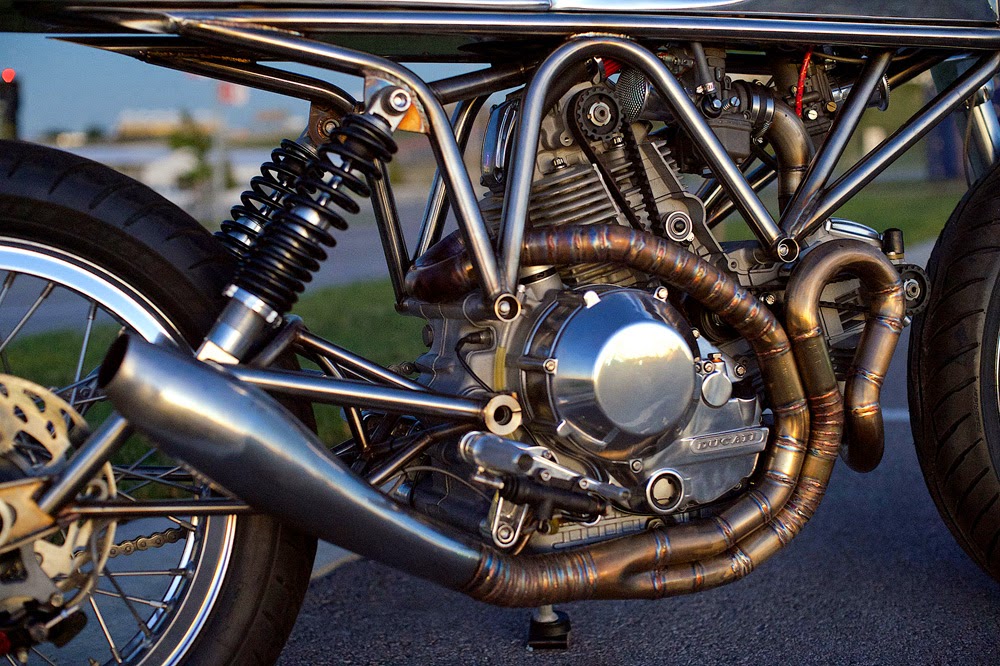 The work that’s gone into the ‘J63’ comes as no surprise. Revival founders Alan Stulberg and Stefan Hertel pride themselves on building custom bikes that are “better than the original” and looking at the original ’97 model 900SS I’d have to say they’ve achieved exactly that. When the Ducati arrived
at the Revival workshop it was a neglected, incomplete restoration. After tearing off the stock plastics the engine was torn down to the crank and treated to an extensive overhaul. All new bearings, gaskets and rings were installed and the cylinders honed. The crank was balanced. valves renewed and the heads were ported and polished for maximum efficiency. Twin Dellorto PH36 carbs with accelerator pumps now deliver the fuel to the engine and a custom stainless steel 2-into-1 system with hand formed silencer take care of the exhaust gases. To deal with the power gains the boys also upgraded the bikes clutch using a refurbished Ducati Corsa “slipper” clutch from a 1098. 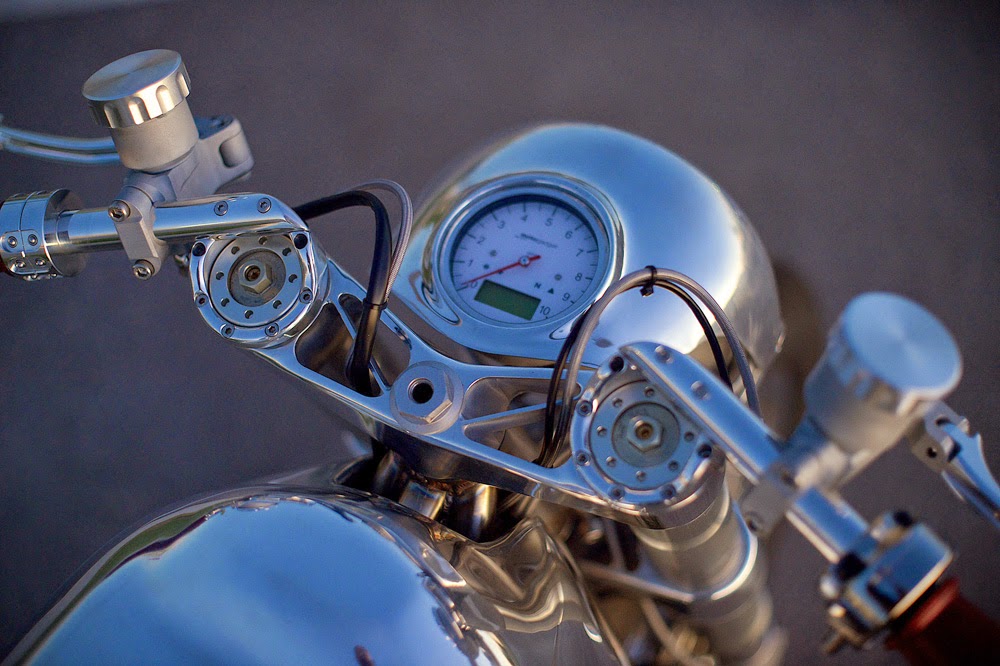 An upgraded stator and regulator/rectifier, ignition system, wiring loom and an antigravity battery make up the list of charging system upgrades, while LED lighting and Motogadget switches and electrical controllers modernise its electronic accessories. Revs and speed are displayed via a custom mounted Motoscope Classic gauge and for the information hungry rider it’ll also report on top speed, oil pressure, average speed, voltage, current selected gear and the all important 0-60mph times. 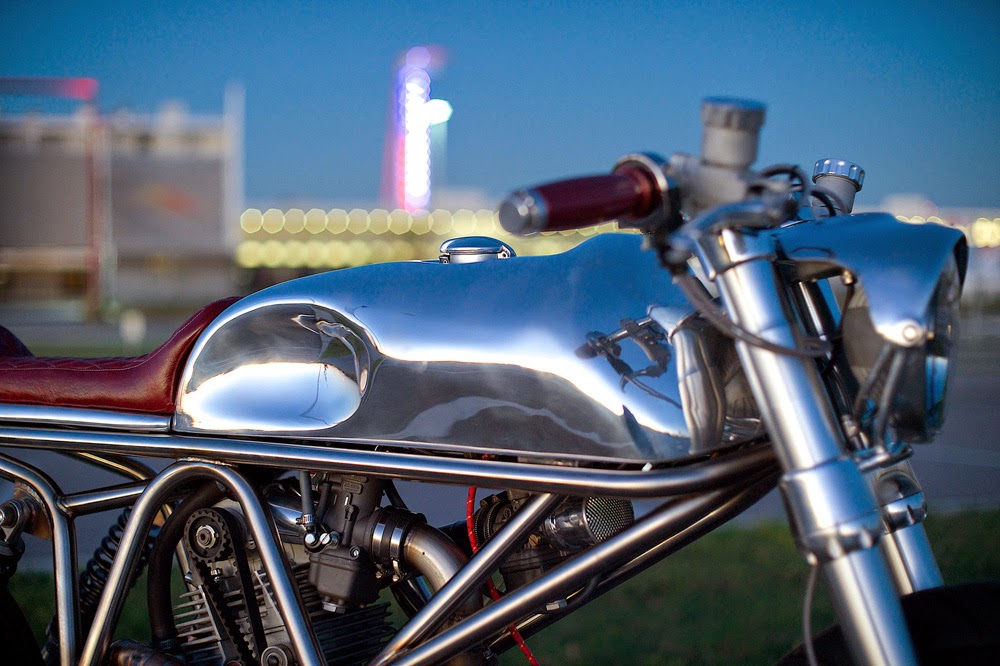 Handling upgrades come in the form of fully adjustable Öhlins cartridge shocks and a set of upside-down telescopic forks taken from a Ducati Sport Classic. Braking is managed by Brembo in the rear and Discacciati up front and the wheels are custom laced Sport Classic rims wrapped in Avon rubber. The high mounted clip-on style bars are a work of art and are, of course, custom made. You’ll also find a set of custom rear-sets for foot controls and a top triple clamp all milled at the Revival workshop. 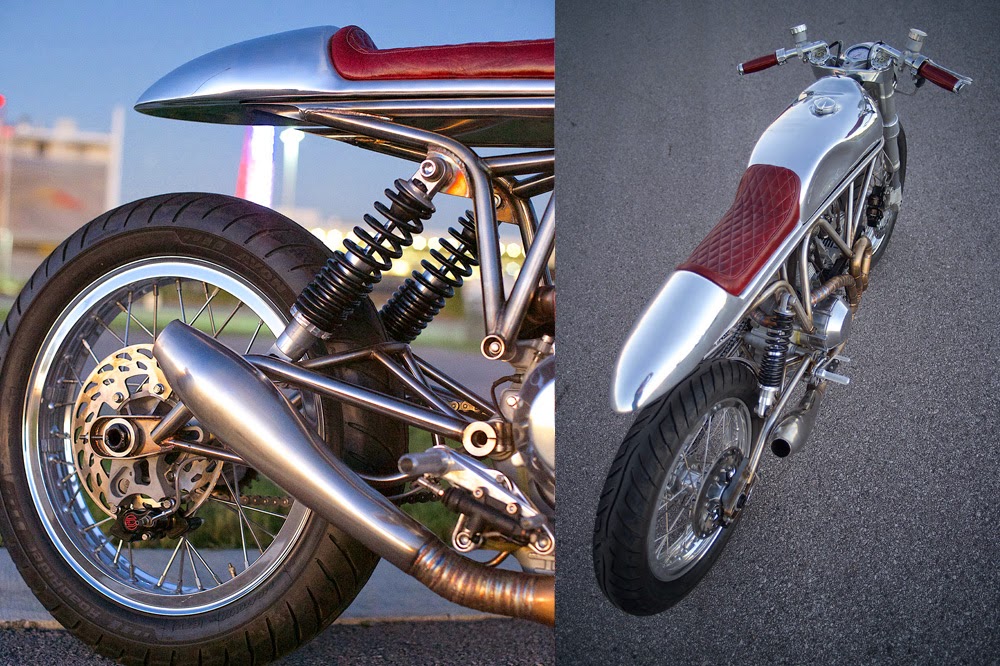 The trellis frame of J63 is an all new design built in house by the Revival team giving to create a leveled stance and prepare it for the fitment of the custom bodywork. Using hand forming techniques aluminium sheet was shaped to create the J63’s slender tank and tail. By having the bodywork run parallel to the road and tapering the the balance of passion and pragmatismTTtail off sharply the bike has an awesome feeling of speed even when it’s sitting stationary. Countless hours of polishing have resulted in mirror finishes on almost all of the bikes alloy components and to add a final touch of colour the boys added deep red grips and a beautifully made, diamond stitched seat.

Picturing the Revival Cycles J63 as the plastic covered, 90’s sports bike it once was is now almost impossible and quite frankly I much prefer gazing at it now.

Source: Return of the caferacers